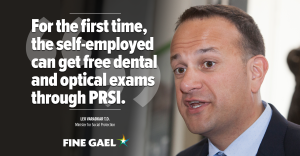 Minister for Social Protection Leo Varadkar has this week extended the Treatment Benefit scheme to some 450,000 self-employed people and their dependent spouses for the first time. This includes small business owners, farmers, tradespeople, freelancers, contractors and professionals.

It means that people who work for themselves and pay PRSI at class S can now get the same regular dental and optical examinations, free of charge, that until now were only available to employees. They can also get a grant for hearing aids of 50% of the cost, to a maximum of €500 per aid, every four years. 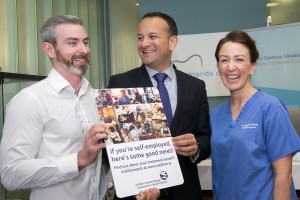 “One of my key priorities on being appointed Minister for Social Protection was the restoration of the treatment benefits for employees, and its extension to the self-employed. As someone who believes passionately that self-employed people deserve to be supported by Government and treated equally when it comes to tax and social insurance, I’m really pleased to bring in this reform. Self-employed people now join the 2.2 million other PRSI contributors who already enjoy these benefits. I particularly want to thank the professional representative bodies, whose members provide services for the Department: the IDA, AOI, ISHAA and FODO, for their constructive and positive engagement on this matter. 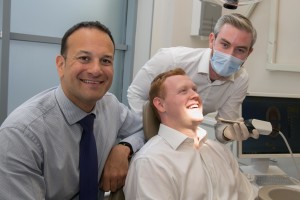 “There’s more to come, for employees and the self-employed. I am a strong supporter of the contributory principle, the idea that people who pay into the system should benefit from it. Which is why later this year I will also restore some of the most popular treatment benefits available through PRSI, which were removed by a previous Government.

“This will include the restoration of scale and polish treatment under the dental scheme, and the option of a free spectacles or a contribution towards a more expensive pair under the optical scheme. From now on, the restoration of benefits such as these will be available to both employees and the self-employed. 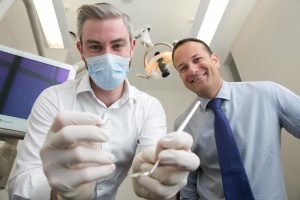 “I will also bring in further benefits for the self-employed later this year, when self-employed contributors who cannot work due to long term illness or disability will also have the option of applying for invalidity pension for the first time. This marks an important step in the provision of contingency cover to self-employed people, and is also real value for their PRSI contribution.” 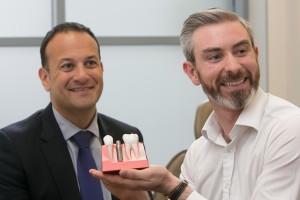 Further details on the Treatment Benefit scheme are available on www.welfare.ie