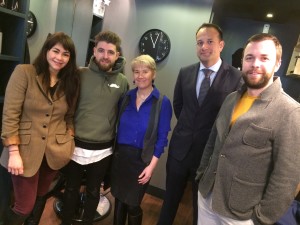 Now much easier to get on scheme for many one parent families, people with disabilities, farmers etc

Minister for Social Protection Leo Varadkar visited a north Dublin barber shop today which was set up with help from the Back to Work Enterprise Allowance, and met several business people who used the scheme to start their own enterprise while unemployed or claiming benefits.

The Minister announced changes to the qualification period for the Back to Work Enterprise Allowance (BTWEA) to make it much easier for many one parent families, people with disabilities and farmers to participate.

The Minister also used the occasion to publish a review of the scheme which found that it has a high success rate, with participants twice as likely to be off the live register after six months than non-participants.

The Back to Work Enterprise Allowance helps people who are unemployed or claiming welfare to set up their own business and continue receiving State income supports for two years, while getting advice and support for running a new business.

“This is a fantastic programme which allows you to retain your weekly welfare payments while starting your own business. If you’re unemployed, a one-parent family, claiming Disability Allowance or on a scheme like Farm Assist, the Back to Work Enterprise Allowance gives you ongoing financial support as well as expert advice.

“The review which I’m publishing here is really encouraging. This compared people who had stayed on the BTWEA for the full two years, with those who did not participate. It found that those who completed it were twice as likely to be off the live register six months later, than those who didn’t take part. This trend was also evident more than 18 months later.

“And we’ve also made it much easier for many more people to avail of the allowance. We have reduced the qualification period from 12 months to just nine months for more people on welfare, not just for Jobseekers, but also reduced those on other schemes like One-Parent Family Payment, Jobseekers Transitional Payment, Disability Allowance, and Farm Assist, and other welfare payments.”

The Minister met the BTWEA participants at HIM Barbershop on the Mobihi Road in Dublin, which is run by Robert Giffney who finished the scheme in early 2016. He has also developed his own HIM branded merchandise.

Also present was Holly Perreira, an illustrator and animator based in Dublin. She set up Hyper Pictures in 2015, where she works on a wide variety of projects, ranging from murals to editorial illustration, traditional sign painting to animation for music videos. And the third participant was Eoin Kernan from Dublin’s northside. He is the founder and creative producer behind Slick, a leading commercial and corporate film production company. Slick develops and produces digital content for organisations to promote their brand.

Minister Varadkar said: “It’s great to meet these participants. I want to commend Robert Giffney, Holly Perreira and Eoin Kernan for taking the initiative and availing of the Back to Work Enterprise Allowance. Entrepreneurs are vital for local economies, our economic future and for job creation. That’s why my Department will implement the review’s recommendations in the coming months to ensure that the scheme remains effective.”