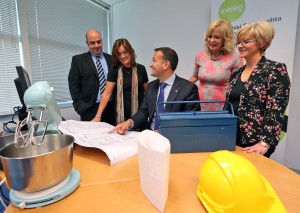 New CSO figures showing that the Live Register has fallen below 300,000 for the first time since 2008 have been welcomed by Minister for Social Protection Leo Varadkar and Minister for Jobs, Enterprise & Innovation Mary Mitchell O’Connor.

Now standing at 286,490, the unadjusted Live Register has dropped below 300,000 for the first time since 2008. This is a year on year decrease of 13.92%. It’s further evidence that good progress is being made in tackling joblessness and helping people back into work.

Minister Varadkar said: “Three major milestones have now been passed, with the Live Register falling below 300,000, unemployment falling from its peak of 15% to below 8%, and the number of people employed exceeding two million, all for the first time in eight years.

“Since coming to Government we have essentially halved unemployment, and my objective for the next few years is to halve it again. And I can now say with certainty that we will exceed our target for 2016 to reduce the number of people in long-term unemployment by 20,000.

“However, as unemployment goes down it gets harder to keep bringing it down. As indicated earlier this week, my target is to bring unemployment down to between 5% and 6% and long-term unemployment to 2.5%.

“We will do this through activation measures like: one-to-one engagements with jobseekers; making work pay through sustainable wage increases, effective tax reductions and new social insurance measures like paternity benefit; promoting financial supports like JobsPlus and the Wage Subsidy Scheme; developing an Action Plan for Jobless Households; reforming existing work schemes like Community Enterprise and Tus; using incentives like JobsWeek to match jobseekers with employers; and developing initiatives across the whole of Government in education, training, housing and childcare.”

Minister Mitchell O’Connor said: “Every job is vital and getting the Live Register figure below 300,000 is a major milestone. It follows the most recent employment figures which show that now 2million people are at work for the first time since 2008. Employment has increased in every region – in some places more than others but every part of Ireland has seen employment levels improve from their lowest points.

“Later this month I will be finalising regional jobs reports and they will demonstrate that in all but two regions – the South-East and the Midlands, employment levels are within 1% of the national average.

Every job is precious.  Every job created has a real effect on men, women, and children and the wider community.  It gives people self-respect, dignity and enables them to support their family and have a better quality of life.  That is why we cannot be complacent about job creation, but I am happy to report that there has been a momentum of job creation announcements in recent weeks and months throughout our regions. I want to ensure that this continues, creating the right environment for job growth right across the country in all areas of Ireland is my key priority and these live register figures issued today by the CSO show they are going in the right direction but we must continue as a Government to work hard to ensure that this continues.”