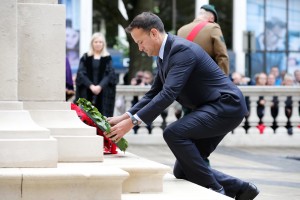 Minister for Social Protection Leo Varadkar represented the Irish Government at an official ceremony at the Belfast City Hall Cenotaph marking the centenary of the start of the Battle of the Somme.

The Minister laid a laurel wreath at the Cenotaph during the official Belfast City Hall ceremony, alongside Belfast Lord Mayor Brian Kingston.

Speaking before the ceremony, Minister Varadkar said: “I’m honoured to represent the Government of Ireland in remembering the thousands of people from across the island who lost their lives in the Battle of the Somme.

“The heavy losses sustained over 141 days of bloody fighting at the Somme affected individuals, families and communities all across Ireland. One hundred years on we remember war so that we can imagine peace. We commemorate all those who fought, all those who died, and the legacy they left behind. 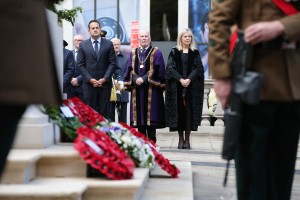 “We especially remember the bravery of soldiers from the 36th Ulster Division, as we will remember those from the 16th Division in the weeks ahead.”