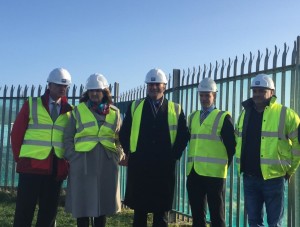 Local TD and Minister for Health Leo Varadkar has turned the sod on two new schools in Dublin 15 alongside Tanaiste Joan Burton.

Work is underway on brand new buildings for Powerstown Educate Together National School and Gaelscoil an Chuilinn. Minister Varadkar said it’s yet more evidence of the huge school building programme underway in the area.

“It was really special to turn the sod for these new school buildings. It means that Powerstown Educate Together NS and Gaelscoil an Chuilinn can look forward to permanent homes within just over 12 months,” Minister Varadkar said.

“I want to congratulate everyone involved in these projects, who have worked tirelessly to reach this day. Thanks to their efforts and goodwill, many generations of schoolchildren will have a new home in state of the art buildings.

“West Dublin is benefiting from a major investment in new schools and school buildings under this Government. There has been an enormous investment in new schools, and extensions to existing schools, in Dublin 15 and Dublin 7 in the last few years. Massive housing development occurred during the boom years but the last Government of Fianna Fáil, the Greens & Independents left Dublin West behind when it came to new schools, even though they had much more money at their disposal than we have now.

“We are only able to make this increased investment in our future because the economy is now recovering. We need a strong economy to produce the resources we need to invest in education, health and infrastructure. In the next five years, we can do all of this and more, but only if we keep the economy strong and protect it from those who would undermine it.”

Powerstown Educate Together NS was set up in September 2011, and Gaelscoil an Chulinn in September 2012. They share a school campus and work closely together. There are four phases to this construction work, and it’s expected that Powerstown Educate Together will be in its new building by next September, with Gaelscoil an Chuilinn following suit in February 2017.