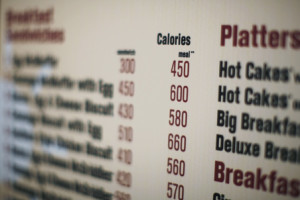 Minister for Health Leo Varadkar has said he is even more determined to press ahead with compulsory calorie counts on food menus after an independent survey commissioned by his Department revealed that just 7% of food businesses are providing the information on a voluntary basis.

A survey and independent evaluation by University College Cork on behalf of the Department of Health revealed that the vast majority of food businesses have not responded to the call to post calorie information on their menus.

“We know that over 95% of consumers in Ireland want the calorie count of meals displayed on menus. It’s a proven way of changing consumer behaviour and independent evidence from the USA shows that calorie posting is very effective. So the results of this survey are very surprising.

“The State has made a conscious effort to support businesses, including the online calorie calculator provided by the Food Safety Authority. I appreciate that it can be difficult for some businesses in particular which change their menus on a regular basis. But when uptake is that low, it’s clear that the we need to take further action.

“I have already obtained Government approval to draft a Bill to make it compulsory for food outlets to display the calorie content of meals. The intention is to have this passed by the Oireachtas and enacted in 2016.

“Although obesity levels have stabilised, the recent Healthy Ireland survey showed that 60% of Irish people are overweight. In the near future we will publish a National Physical Activity Plan and an Obesity Policy. And we are also pressing ahead with new legislation to make the posting of calorie information compulsory on food displays.”

In 2012 an FSAI national consultation found that over 95% of consumers in Ireland wanted calories on menus.   On foot of the Government decision – and to help inform the Regulatory Impact Analysis prior to drafting legislation – two pieces of work have been done. The first is an independent evaluation of the current voluntary calorie posting scheme which has been conducted by Professor Ivan Perry’s team in University College Cork. UCC’s work also includes a study of international experience and evidence around Calorie Posting and will help inform the drafting of our legislation.  The second is a public/industry consultation on the proposed legislation which has now closed and is being analysed.

The evaluation, conducted on behalf of the Department of Health by UCC, used a mixed methods approach incorporating three interlinked phases; a national telephone survey (Phase 1); structured observation visits (Phase 2); and semi-structured interviews (Phase 3).  It discusses recent data which shows that almost a quarter of the total calorie intake of Irish adults under the age of 65 is consumed outside of the home.  Out of home eating is associated with higher dietary intakes of calories.  Out of home eating environments are therefore of key importance regarding the promotion of healthy food choices.  Scientific evidence shows that providing calorie posting on menus can be a powerful tool to improve the food choices of a large number of individuals at the same time.  The proportion of food service businesses displaying calories was heavily dependent on chain businesses and poorly reflected in single outlet owner establishments.  The main reasons mentioned by food service businesses for not displaying calories included time and cost constraints and that is was not mandatory.

Overweight and obesity are a public health priority for the Department of Health. The Department recognises that alone no single initiative will reverse the growing obesity trend, but a combination of measures, one of which is calorie posting on restaurant menus, should make a difference.  A high priority currently for the Department of Health is the development of an Obesity Policy and Action Plan. Work is well underway on developing an obesity policy this year and which aims to increase the number of people with a healthy weight in Ireland.  The key themes of the policy are prevention, care and management, and research and data with the overall aim of reversing the rising levels of overweight and obesity.